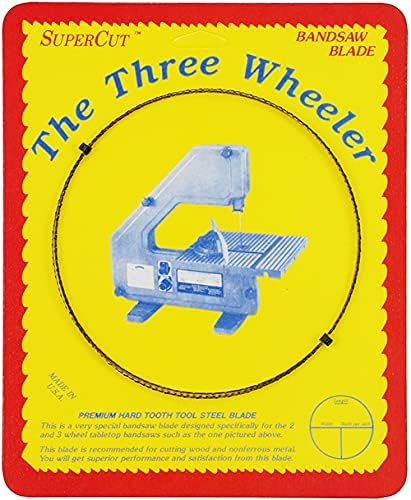 3-Wheeler 72" x 1/4" 14R Blade breakage and poor blade performance are common problems with small 2 or 3 tabletop bandsaws. These problems are caused by the extreme flexing of the blade caused by the small size of the wheels that the blade runs on and the high speeds normally used. These 3 wheeler blades are specially designed for 2 or 3 three wheeler tabletop bandsaw to cut wood or non ferrous metals only . 3 wheeler blades will not stand up to ferrous metals. The different type of tooth patterns along with their functions are described below: (The width of blades do not play a role in the type of material being cut): 6 Hook - for cutting wood ; 14 Raker - for cutting nonferrous metals between 3/16" to 7/16" thick; 24 Raker - for cutting nonferrous metals between 1/8" to 3/16" thick; Note: As a rule for optimum cutting, 3 teeth need to touch the metal at one time. For example, cutting a material that is 1/8" thick aluminum would be best suited by a blade with 24 teeth. (3 teeth / 24 teeth/inch =1/8 inch )